“We hear little about the outside world except that Marines are dying. “

Letter Two was written about a week and a half into boot camp. And things had gotten real. Was there a war going on or what? One of our Drill Instructors had a tape recorder of battle. Not just some historical recording, mind you, he had taken a small tape recorder into combat around Najaf during the Iraq invasion. His duty was to be the disciplinarian. To PT you when you didn’t perform up to standard. Often this came in the form of push-ups, mountain climbers, squat thrusts…and belittling you. Thicken your skin.

One night, I remember he told me about an RPG gunner who had his squad pinned down on a road just outside the city. He said, “The guy popped up and fired a rocket right at me. It skittered on the road right by my feet. Almost killed me, you got that? He popped up again…” his gaze softened and he looked into the distance. After a moment he looked back at the few recruits he was addressing. “He died, you understand me?”

And of course, what would a modern Marine be without referencing Full Metal Jacket (best movie about Marine boot camp ever), being sick as a dog, and still expected to love it? Transcript below: 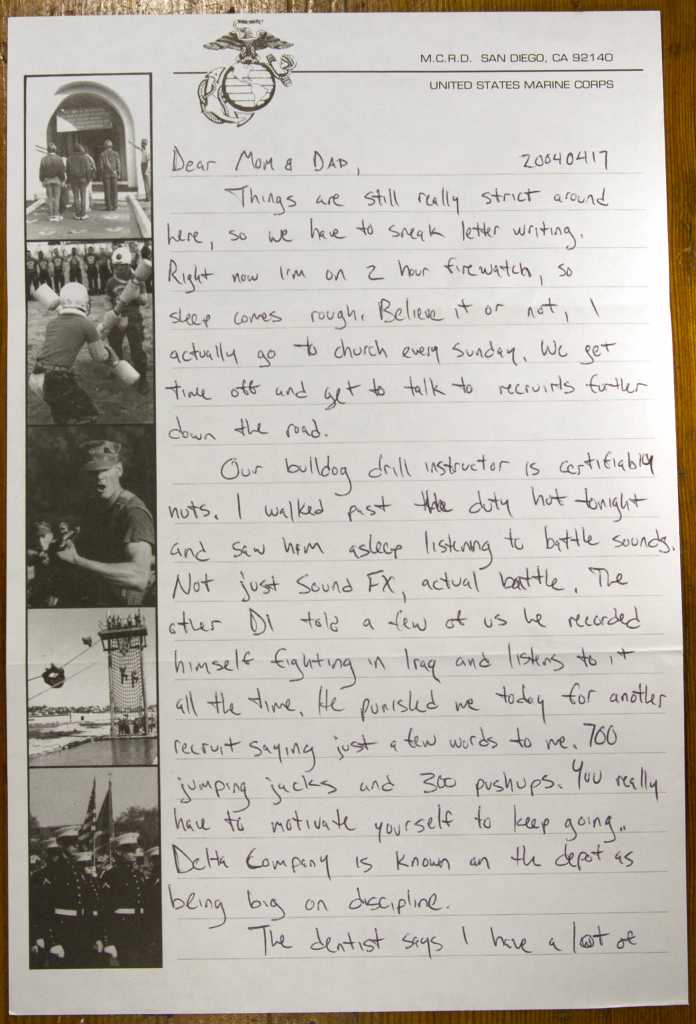 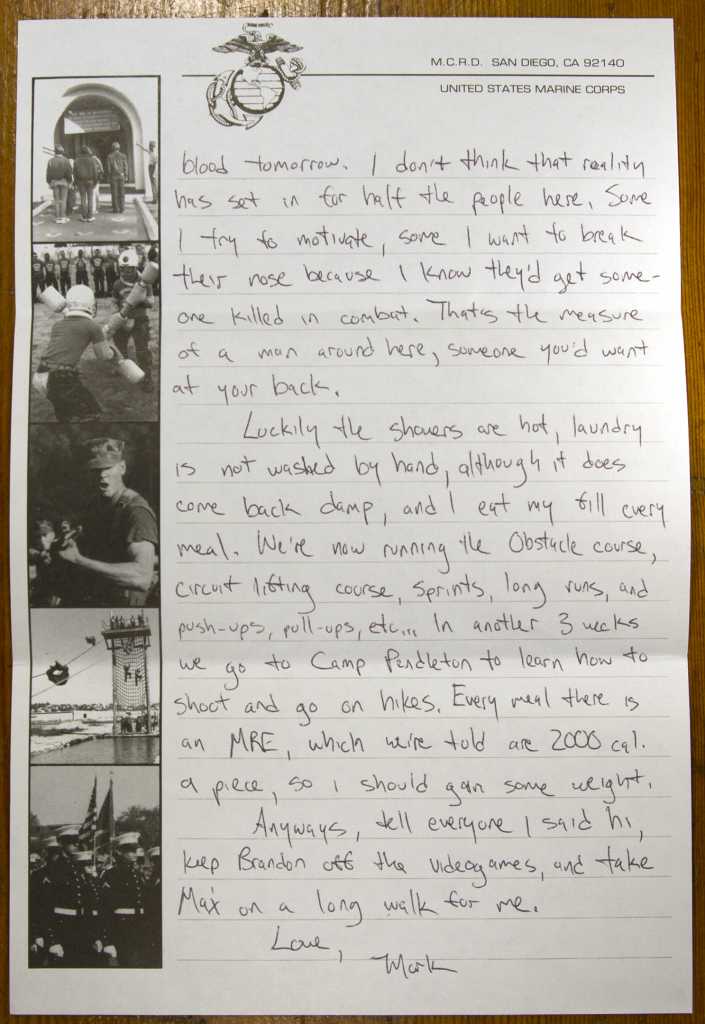 Things are still really strict around here, so we have to sneak letter writing. Right now I’m on 2 hour firewatch, so sleep comes rough. Believe it or not, I actually go to church every Sunday. We get time off and get to talk to recruits further down the road.

Our bulldog drill instructor is certifiably nuts. I walked past the duty hut last night and saw him asleep listening to battle sounds. Not just sound FX, actual battle. The other DI told a few of us he recorded himself fighting in Iraq and listens to it all the time. He punished me today for another recruit saying just a few words to me. 700 jumping jacks and 300 pushups. You really have to motivate yourself to keep going. Delta Company is known on the depot as being big on discipline.

The dentist says I have a lot of cavities, so they’re scheduling 2 appts for fillings. They said they’re more nitpicky than regular dentists because soldiers will go awhile without brushing in the field.

Two weeks have gone by and sometimes I feel a little homesick. I miss steak and beer. More than half the recruits in our platoon are sick right now, and I’m one of them. Sore throat, cough up phlegm, runny nose, and my voice is gone. The 2.5 mile runs really push me because of it. No way I’m going to sick call, though, no light duty for me.

We hear little about the outside world except that Marines are dying. The situation reminds one of Full Metal Jacket except the DIs tell us most of us will go to Iraq. Already two Drill Instructors were lost and a number of recruits from the last two training cycles. So I keep myself motivated because sweat today saves blood tomorrow. I don’t think that reality has set in for half the people here. Some I try to motivate, som I want to break their noses because I know they’d get someone killed in combat. That’s the measure of a man around here, someone you’d want at your back.

Luckily the showers are hot, laundry is not washed by hand, although it does come back damp, and I eat my fill every meal. We’re now running the obstacle course, circuit lifting course, sprints, long runs, and push-ups, pull-ups, etc… In another 3 weeks we go to Camp Pendleton to learn how to shoot and go on hikes. Every meal there is an MRE, which we’re told are 2000 cal. a piece, so I should gain some weight.

Anyways, tell everyone I said hi, keep Brandon off the video games, and take Max on a long walk for me. 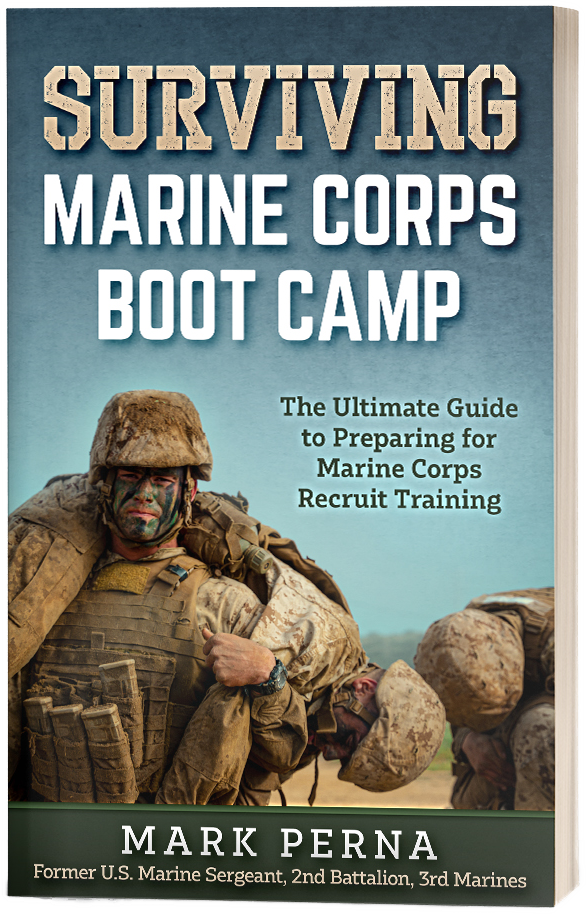 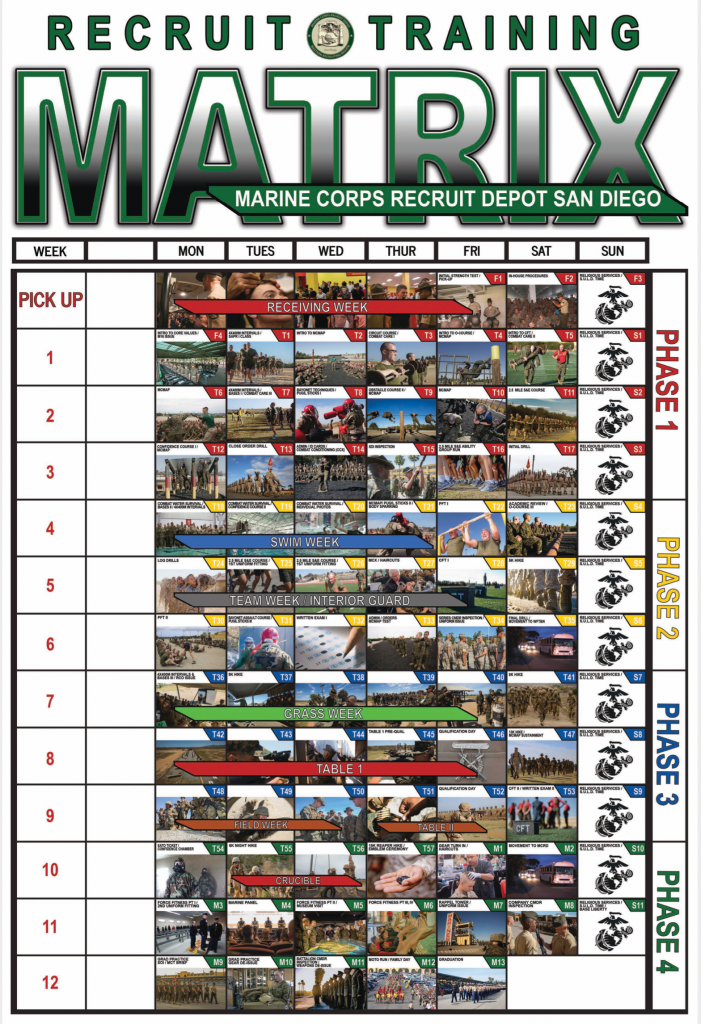